Celebrities, Chrome and costumes were all part of the highlights at the Sturgis motorcycle rally in 2018. The rally is well-known for the rumbling of thousands of engines, and with this special event starting way-back in 1938 it has just enjoyed its 78th year in existence, even though it was suspended due to gas shortages during World War II. The 10-day rally attracts visitors from all over the world, and this year the attendance was estimated at 500,000. 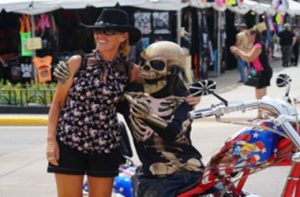 The Sturgis is a popular event that has participants enjoying a ride along the twisting roads of the Black Hills, to bask in a two-wheeled celebration and to wear biker-related gear as they partake in a rally of all that is shiny, loud and super-fast. Visitors described this year’s Sturgis as wild, crazy and cool and said they came to see and hear everything the Sturgis stands for.

A large part of the attendees stays at encampments just outside the city since there are only a few hotels, the camping grounds can accommodate thousands and feature bars, concerts and many motorcycle demonstrations. For US citizens the Sturgis is a festival in which anything goes, fists fly, drugs flow and nudity flourishes. But times have changed and in reality, well today the festival is attended by professionals who have too much to lose to take the risk of being arrested. 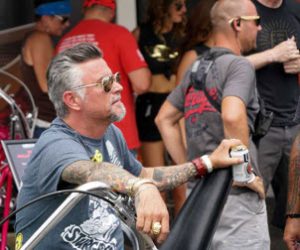 City officials say that the top professionals, part of the Sturgis are accountants, lawyers and doctors. In making the statistics more understandable is that Indian motorcycles or Harley-Davidsons cost about $20,000, high-end models can be as much as $50,000, and then there is still the cost of customisation, plus the gear, gas and insurance as well as the weekly holiday.

There are long-time attendees that think the Sturgis might have lost its edge, that being the naked shenanigans, rowdy, and drunken bikers once filling the streets, that now belongs to licence holding T-shirt vendors, corporate sponsors, lawyers and insurance companies. The rally became an excuse for one of the largest open-air shopping malls. The streets are lined with booths, hawking ponytail vendors, and shoppers can purchase custom patches, memorialising T-shirts, and while fellow riders chat leather seats can be fitted, that is off-course customised versions of it.

Obviously, the rally is endless fun, and along the street, there are plenty of open-fronted bars enabling those sipping on a drink to enjoy the passers-by such as women in thongs, bikinis and leather-clad bikers. This year’s celebrities list included Sarah Palin, Richard Rawlings as well as Lynyrd Skynyrd and Kid Rock. The airbrush and pinstriping painter, Keith Eccles describes it as all too commercial now, it is totally different in his opinion and a human zoo. First-timers find the busy streets and leather-clad bikers as well as everything else to push the borders of a spectacle in a very good way. Huge groups of motorcycles rumble past non-stop as some arrive others depart from the town and most say they are completely hooked on the festivities, the bikes, the people and all the celebration of stands for, so the Sturgis will undoubtedly continue to entertain for many years to come.